A Glimpse Into The Past

“The easy confidence with which I know another man’s religion is folly teaches me to suspect that my own is also.” – Mark Twain 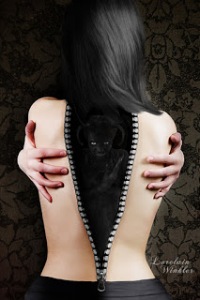 Throwing the covers over my seething nature, I burrow beneath religion, hiding who I am. Pops said, “Religion is for the weak”, that may the case, but my reasons are that I’m fucking scared of who I really am. If my soul had a window, I’m sure there’d be a line to watch the horror show. Damn humanity, they love to watch insanity in action, paying millions of dollars to watch all kinds of degradation on the big screen and drooling, lonely, over their computer late at night. I’m sure people I know and haven’t known have stayed around only to see what kind up fucked up shit I’m gonna do or get into next. The guise of church and God is the ultimate facade. I really do believe in God, but I feel like I’m a fake when I act according to my faith, and almost feel like I’ve been duped when I “do good things” not because I want to, but because my beliefs tethered me into obedience. Being good is desirable, but only because I’m scared of whats inside me. I can honestly say that God is real to me and that I try to listen and obey, but (there’s always a but in religion) damn if I don’t feel like it’s a trick. I’m religious not out of love for God, but from fear of who I’ll be if I don’t “obey”. My soul is filled with many violent and revolting perversions, and most of my self destructive behavior comes through that realization. I don’t want to hurt anyone, to cause mayhem and destruction, I don’t want to be what I am. My detractors, the greatest of whom reside in my head, taunt me saying, “how can you write all these hope filled articles about God and His work in your life while being a whole different person inside. Your the ultimate hypocrite.”. It’ll be known when all things are known that my battles where never seen by humanity, and my greatest victory will be to go to the grave without fulfilling the deviant nature that claws at and through my robes of righteousness.

Forsaken by sanity, forgotten by humanity, she fought just to keep from fighting. Barely one step ahead of the encroaching madness, weary from the race, she laid down her arms. Passive resistance to no avail, giving all to go beyond today but consumed by fear of tomorrow and an unspoken dread of a foreshortened future. Like a gold ring in a pig’s snout her beautiful body hung from a leprosy filled soul. Her mind wasn’t empty but overcrowded with thousands of thoughts every minute, from the mundane to the complex, the raucous sound filled every crack and crevice of brilliance and care. She died long ago, resurrected once, only to be crucified again by the same love that brought her life. This cross she bears through life, stumbling in the crowded streets with the roar of the past and the horror of the future the foreboding songs of the morning. Hear her silent scream, silent lest the world hear the echoes of her demise. In the end, only God knows why she’s alive, why she persists, why living is a threat and death a quiet retreat.

First published at Opinions of Eye

“Nothing external to you has any power over you.”
― Ralph Waldo Emerson
The haven from which we draw peace is found not without but within. Circumstances change and environments produce storms, but if preparations are made in advance, the harbor’s climate is safe and steady. A harbor built before the hurricane provides a sure relief, but laboring to lay foundations in the pouring rain is frivolous. The place of refuge lays beyond the shores of feeling, away from circumstance. A master architect has drawn plans for this refuge and laid them open to all. Their hard to build, patience is needed, and much strength from beyond, but these are afforded to those who labor through dependence on the heavenly Father, a willing participant in building a safe harbor. When finished this will provide protection from the wailing winds and torrential rains of death, life, love, and circumstance. The first step in the process is an admission that help is needed and then an establishment of a relationship with the architect. Then follows conformation to His steps and a steady endurance to resist looking outward at the storms but inward to the work. There’s a peaceful place which provides an unchanging calm environment and it’s up to us to build it. Godspeed friend, there is much work to do here.
First published in Opinionsofeye.com
“When a man is denied the right to live the life he believes in, he has no choice but to become an outlaw.”  – Nelson Mandela

“I want to say somewhere: I’ve tried to be forgiving. And yet. There were times in my life, whole years, when anger got the better of me. Ugliness turned me inside out. There was a certain satisfaction in bitterness. I courted it. It was standing outside, and I invited it in.”  ― Nicole Krauss, The History of Love
A vague feeling possesses my soul anonymously. Where does it come from? Does it brood in the dark waiting for a chance to squeeze through my door like a sneaky black cat darting between my legs for a chance to roam? Why would I want to sequester it like I need its undivided decision about who I am? I’m running around madly chasing the minuses of the life’s equation to herd them into a pen and shut the gate. This is hard work and I’m sweating profusely, no wonder I lived so long with them amok among my things. Why do I feel loyal enough to give them such a large field to run in? I thought myself to have won this battle but the little critters spawn like roaches and where I see one, it’s guaranteed that more hide in the shadows. Life is bored with complaints, it’s time for compliments to my soul. Like sour cream on a potato and lemon in the tea, the bitter makes the taste of life more palatable.
First published in Opinionsofeye.com
“The certain prospect of death could sweeten every life with a precious and fragrant drop of levity.” ― Friedrich Nietzsche
Passing around hard thoughts,
Skipping through rough consequences
Rebuking the threats that abound
A break deserved brought about by
my sweet Levity.
The feasts are prepared,
a peaceful interlude is granted
smiles endure and the future ignored
an intermission paid in full by
my sweet Levity.
All memories are her ethereal songs,
Sweet lullabies sung before the never setting sun
Her persistent touch rocking the cradle
New life borne in light by
my sweet Levity.
First published in Opinionsofeye.com
“God may forgive sins, he said, but awkwardness has no forgiveness in heaven or earth.” – Ralph Waldo Emerson
“Great endowments often announce themselves in youth in the form of singularity and awkwardness.” – Johann Wolfgang von Goethe 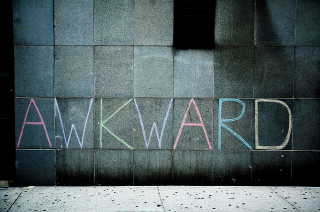 There are reasons why at times my interactions with people seem strained. I say the wrong things. I limp through my social circles, everyone making way for my awkward presence. I bring up subjects deep and poignant. I provoke thoughts, thoughts you’re not accustomed to. I speak in a way you find odd. My accent tainted, not pure, not from any one place. The same with my mannerisms. I fidget with my hands in a crowd, unsure of how to hold them. I wonder if the way I’m standing is threatening. If a purse is left close to me, I walk away, believing you’ll accuse me if something is missing. Trying to drive with a thousand choices that are made instantly, provokes these social swerves that seem ungainly and make others uncomfortable.

Do you know that this isn’t me? This isn’t how I am, constrained to behave oddly, chained to a limp of the soul and mind. Do you know I’m injured? Do you know I almost died because of love? Do you know I fought for my life many times, not from just physical beatings but mental torture and illness? Do you know that I’ve argued for my release from beatings given, many, many times?
Do you know how these scars make it hard to smile? The hardened skin refusing to release the joy struggling to stay alive in the poisonous atmosphere of my melancholic soul? Do you know the thousand thoughts I think just to go out the door? Checking my clothes, the color of my skin, the dark circles under my eyes, the length of my nose, the girth of my belly? Do you know that walking to my car creates anxiety? I grab my keys like a weapon; I make sure I always have a knife, though these things have never delivered me from violence or comforted me. Do you know that I struggle with violence a hundred times an hour? Not only my self-imposed violence toward me or others, but of the perceived violence I see directed at me in every face?
Do you know that I always try to help others? Do you know though having been burned 99 times out of hundred, I still reach out, thinking that everyone believes I’m a sucker? Thinking that they all talk among themselves, working out plans to rob me of my time, energy, and money? Do you know that I know you are using me? Do you know that I still give in spite of this? There are reasons, stop and consider why.
Take time to realize that the people you know and see everyday are hurt and wounded. Look out from your struggle and know that a friend, a family member, a bartender, a cashier, is on their last thread of hope, wanting to die from the pain they feel. Reach out with compassion on those who irritate you, understand that the scars they bear make it difficult to respond with graciousness toward you and your problems. We are all in this together, make room in the survival raft for those drowning in despair. Act without requiring a suicide note or a midnight call from the police before you reach out…
Also published in Broowaha Magazine
First published in Opinionsofeye.com
02082012
Opinions Of Eye
Blog at WordPress.com.